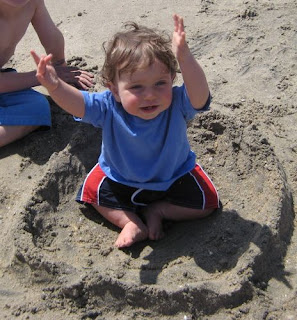 Skap and I got together yesterday to record a couple of things. We laid out the basic keyboard track for "(Catch the Spirit) The Spirit (of 17)," which I will discuss in a separate post.

While working on that song, Skap remarked on a picture I had on my Mac's desktop. It was of my son inside a little ring of sand on the beach in Sand Diego. I explained that it was Russell's Private Headquarters, something my daughter thought up and made for her brother to sit in. Skap thought that might make a great Chuxx song title. I agreed, and we discussed it a little bit at lunch. Our initial ideas are about a spy who get irritated because every time he returns home from a mission, the milk has spoiled, the made cleaned up his desk, and the gun rack is dusty.

We finished the basic tracks for "(Catch the Spirit) The Spirit (of 17)," and what happened next will tell you a lot about the Chuxx. We were about to mess around with adding a keyboard part to one of the other songs that will be on the next album. I selected a sound on the Mac for Skap, an emulation of a Rhodes Suitcase Mark II. He began playing a Ray Charles-y riff. I added a drum loop and we decided we had the beginnings of "Russell's Private Headquarters." I'll keep you posted as the song develops.
Posted by Steven at 6:21 PM

You never know where a song is going to come from. "Russell's Private Headquarters" is just a good song title.

Russell also hates that he set his TiVo wrong and missed the Dr. Who Marathon. Real Spies love Dr. Who, but they hate Get Smart. It's too fakey.