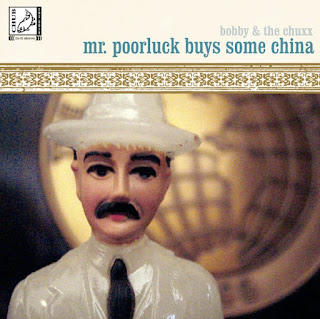 America has waited long enough! Our 37 fans have been more than patient and now that fateful day is finally here! The Chuxx have finally released their 18th album, Mr. Poorluck Buys Some China. You can buy it now at CDBaby.com. Sixteen action-packed songs including: Four songs called "Mr. Poorluck Buys Some China"! One awesome version of a '70s game show theme! Seven different languages! One song about eggs! One song about food poisoning! Two heartfelt tales of love! One song about madness! And one mention of the word "sphincter"!

Be the first, and therefore coolest, person on your block to own what might be the greatest album ever recorded!!!
Posted by Jeff at 7:46 AM