So there's this site called MyHeritage.com, which has on it this really cool tool. All you do is scan in a picture of yourself and it will analyze your face and tell you who you look like. I won't go into detail about who it said I look like (let's just say if Burt Reynolds and Dakota Fanning had a baby, it might look a little like me), but I would like to share that site's thoughts on our Mr. Poorluck. 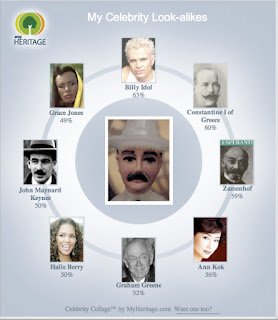 What I find funniest is not that Poorluck looks 50% like Halle Berry or 49% like Grace Jones. It's that this program thinks Poorluck only looks 50% like famous economist John Maynard Keynes, who (at least in the photo they provide) appears to look EXACTLY like Poorluck. Even down to the hat. But he's only at 50%, where Billy Idol, who isn't wearing a hat, is at 63%, just edging out Constantine I of Greece, who at least has a mustache.

Poor Ann Kok, whoever she is, to be thrown into this motley crew. Oh, and Zamenhof? Who might he be? Why, he invented Esperanto, the 19th Century's favorite make-believe language!
Posted by Jeff at 7:43 AM

My monocle fell out.

I've never really seen myself as an actress. I told myself, 'I'm not going to get a job where I need to put on makeup, or one that I need to do my nails.' I hate the idea of putting on makeup, then removing it.