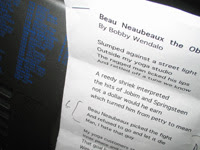 As of this writing, Bobby & the Chuxx are about 75% finished with their latest effort, their 18th album, Mr. Poorluck Buys Some China.

Over Thanksgiving, the Chuxx added the final touches to a couple songs ("Baby Madness" & "Wendy & Lizzie Are in Love Again"), completely recorded some brand new songs ("Eat Egg," "Frank's Got No Pants" & "Bert's Grape") and partially completed one other ("Beau Neaubeaux, the Oboe Hobo"). All things considered, it was a productive three days.

Most importantly, it brought us ever closer to finishing the album. All that's left to do is record the title track...oh, did I mention? There's four versions of the song "Mr. Poorluck Buys Some China." Independent of one another, we've each written a song with that title. We'll see how they all sound. As of right now, there's no plan to distinguish the titles from one another -- each will just be titled "Mr. Poorluck Buys Some China."

But that may change before the album is actually finished.
Posted by Jeff at 9:24 AM